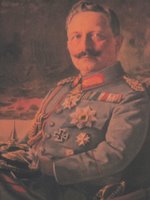 January 27, 1859—the birthday of His Imperial and Royal Majesty Wilhelm II, King of Prussia and German Emperor. The Kaiser is perhaps one of my most revered historical figures. A Protestant monarch responsible for the First World War? How can a staunch Catholic revere this monster? Allow me to explain.

Yes, the Kaiser was a Protestant—a Lutheran to be exact—but I look past that. To me, he embodies everything that is proud and noble about the German culture—at least the way German culture used to be. He may have been a Protestant, but was a much greater friend to Catholics than Otto von Bismarck (who often receives a much more generous interpretation in historical circles). Wilhelm scaled back the anti-Catholic measures enacted by Bismarck, met with the pope several times, and even had a secret respect and admiration for the Church (due to its pomp and regal ceremonies). But what about the war, the Great War?

Contrary to popular belief, the Kaiser was not the war-monger he has been portrayed. There is a saying—where it originated I have no idea—that history is written by the victors. This is largely true. Germany lost the war and Britain and America won (for the English speaking world). So it is only natural that the British and Americans would portray the defeated Germans in a poor light. What happened may only be natural, but is unfaithful to historical fact. Germany may have started the war—but all of Europe knew for decades before that the continent was on the brink of war, and considered war inevitable. The only question was where and when the war would take place. The Kaiser may have been a blow-hard, speaking without thinking, but when it came down to it he always chose peace in the end. Members of his General Staff knew this, and saw him as a stumbling block to German strength in a situation where the Empire was being choked to death by her enemies. When the Kaiser tried to keep the balance of power in Europe and work with his royal cousins, it was often King George in England and Czar Nicholas in Russia that defeated his efforts at keeping the peace.

Had Germany won the war, history would look more kindly upon him. I challenge you the visitor to my blog to do some research on Wilhelm (see especially The Last Kaiser by Giles MacDonogh and Europe’s Last Summer by David Fromkin). You may just learn something. R.I.P Wilhelm II, König von Preußen und Deutscher Kaiser.
Posted by Nick at 9:39 PM

Hi there everyone, it's my first visit at this website, and
article is actually fruitful designed for me, keep up posting these types of posts.

I named my first Son "Friedrich Wilhelm" after the Kaiser. He goes by "Wilhelm" like the Kaiser did. At 5, he knows everything about Kaiser Wilhelm and the German Empire.

Thank you for the post and saying kind words to someone who is still important to my People and Culture!

I named my first Son "Friedrich Wilhelm" after the Kaiser. He goes by "Wilhelm" like the Kaiser did. At 5, he knows everything about Kaiser Wilhelm and the German Empire.

Thank you for the post and saying kind words to someone who is still important to my People and Culture!