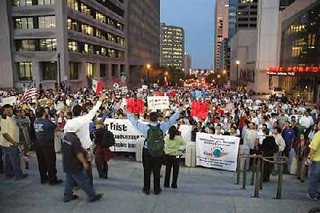 "A Day Without Immigrants"...If Only

Today was the “big day” of illegal alien protests, with the intention of shutting down the American economy. Did it work? No, it did not. To be sure, some areas of the country and some specific industries were affected (i.e. southern California and the produce industry), but by and large it looks as if most Americans experienced life as usual today. What does a monarchist (or specifically this monarchist) think of the illegal alien problem this country now faces?

First of all, it would be my wish for the majority of the world (at least the West) to adopt an immigration and economic policy similar to that which existed in Europe before the First World War. During this time, people and goods could travel from one end of the European continent to the other (ending at the start of the Ottoman Empire) without much governmental restrictions. As long as a man had the money and language skills necessary, he could travel from, say England to Germany, without as much as a passport. This would be great for Americans who are tired of living in this country and would make it possible for them to emigrate to better nations (let’s just pretend for the sake of argument that Europe wasn’t full of welfare-states just like ours and the move to Europe would increase the standard of living rather than be the same or worse). As good as the immigration policies of the 19th century were, there are certain societal and political realities existent now that were not then (i.e. terrorism, welfare-statism, etc.). So now that we are in the 21st century, how should we deal with the immigration problem in America?

First and foremost, a government must have borders, and thus it must have immigration policies. The current immigration laws in America are such that a man can enter and stay in the U.S. only with the permission of the government. If such a man overstays his welcome (visa) or comes here without permission, he is here illegally. We could argue about the morality of such laws, but to do so would be to ignore the present problem. We have millions of illegal (I stress once more, ILLEGAL) aliens in this nation. They are a drain on the American taxpayer (immigrants, legal or otherwise, are more likely to receive government support in the form of welfare, food stamps, etc.), and are likely not to learn the English language or adopt the American culture. This creates a second culture within the nation, further fragmenting our already fragmented and divided culture. The presence of these millions of illegal aliens drives down our wages (illegal aliens are more willing to work for less than citizens are). It seems to me that illegal aliens create more problems than they benefit this nation.

Now let me return to the morality of America’s immigration laws (even though I appeared to disregard it above). The U.S. bishops with Roger Cardinal Mahoney at the forefront (as Cardinal-Archbishop of Los Angeles) fully support the illegal immigrants (perhaps even amnesty). This would tend to make one think that America’s immigration laws are immoral and unjust, requiring Catholics (and all men of conscience) to oppose these unjust and immoral laws. But let us take a step backwards and look at the motives of the bishops. The leadership (political as well as spiritual) of America’s Catholic bishops is abysmal. Rarely do these supposed shepherds shepherd their flocks along the paths to Heaven. Most are unwilling to stand up for the truth against powerful interest groups and lobbies (i.e. homosexuals, feminists, the Democratic Party), and thus most bishops have little if not no credibility (but I must add that we Catholics are still bound to obey them to a certain extent in spiritual and moral matters, as long as they teach the Truth as revealed by the Magisterium). It is my belief that the U.S. bishops are behind the illegal immigrants because they are thinking of one thing and one thing only—money. The vast majority of illegal aliens present in this nation are Hispanic. Hispanic = Catholic = more people in the pews = more money. Therefore illegal aliens = money. As sad as this is, I believe that this is the underlying motive behind the U.S. bishops’ support and solidarity with the illegal aliens.

So exactly what do I propose in this situation? My gut tells me to deport all of the illegal aliens present (or at least as many as possible) and then positively and certainly secure our borders. My head tells me that our nation is shot politically, culturally, socially, and morally as it is and our present immigration problem has little relevance. America is doomed to fail, so perhaps the illegal aliens will only help speed up the process. Maybe I should be grateful to them.
Posted by Nick at 8:08 PM