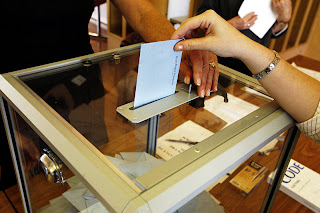 On this, the eve of the 2008 U.S. general election, I thought I would offer my views. What is a monarchist to do in the world's "greatest" democracy?

Americans have but two choices before them: Barack Obama or John McCain. Yes, yes, I know there are other candidates running for president, but everyone knows that only the candidates put before us by the two major political parties have any chance of winning. For Catholics we have an abortion-on-demand proponent with a "Catholic" heretic as a running mate, or a war-mongering neo-con whose "pro-life" voting history is spotty at best. So what's a Catholic to do (no less a Catholic monarchist)?

Personally I'm voting for the Constitution Party candidate Chuck Baldwin for president. He has absolutely no chance of winning, but at least I can vote for him and maintain my self respect. He is not only 100% pro-life on abortion and other life issues, but also is against the Iraq War and same-sex marriage. But why throw my vote away and let the really pro-abortion candidate possibly win? I remind you that one can never commit an evil so that good may come from it (i.e. vote for the lesser of two evils).

Whether McCain or Obama wins tomorrow, this monarchist will go to bed in the same position he was before: in a world that values so much that he abhors.

You are making a good choice. Congratulations! That's the best you can do.

In democracy, the worst of our species rises to the top. Yet another argument for Monarchy!