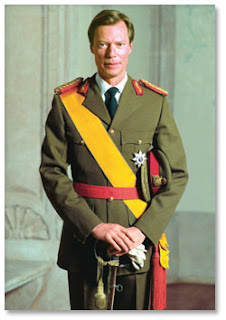 A Monarch of Conscience

Grand Duke Henri of Luxembourg recently made it known that he would refuse to sign into law a law passed by his parliament that would legalize euthanasia due to "reasons of conscience." This move may result in His Royal Highness losing some of his powers and popularity, but in the end he is doing what he must: put his Catholic faith before his throne. The Grand Duke is doing what is just and right, even if his people refuse to acknowledge it. His Royal Highness' actions are a model for all monarchs. (Read more about this event here.)

Well this is just another example that liberal democracy is judas in
the eyes of all religious people. This tratious act would reduce the
Grand Duke into nothing more than a puppet. If we talking about the
shogunate in japan we always use past tense, well now we all know
that it not happening in the past, it is happening now in our live
time.
Basically 20th american liberal democracy is not soo different from
the shogunate afterall, the only different is if the shogunate used
military power to force their will these "democratic atheist" would
used the will of "idiot & ignorance" public.
Liberal democracy will eventually create a anarchistic socity who
believe that they can do anything they want; that make them happy;
just like animals would do.
One of the main function of the Throne is to check the action of the parliament, so they would not abuse their power. If this power is
stripped from the Throne than my questions are: what is the function
of the Throne in the eyes of these animal heretics anyway?, second:
Who or what give them the right to dismantle God given right to the
Throne!, third: Statistic says that the majority of luxembourg are
royalist, well now we all know that is not true afterall; this
parliamentary act signify the reality that luxembourgers are just
another american liberalist and supporter of atheistic republic.

More proof yet that we should Restore the Old Order!

And because of his actions he lost constitutional powers!