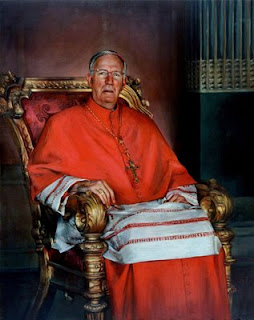 A Roman Catholic Lord Spiritual?
According to an article from The Times, Cormac Cardinal Murpy-O'Connor may be the first Roman Catholic Lord Spiritual to sit in the British House of Lords since Henry VIII broke from the Catholic Church and founded the Church of England. Current canon law of the Catholic Church forbids clerics to hold political office, but apparently the Holy See is going to offer the Cardinal a dispensation from this rule. While Cardinal Murphy-O'Connor may not be the world's best cardinal, having a Roman Catholic prelate in the House of Lords just may help to bring the United Kingdom back to its Christian roots and help prevent many of the immoral and secularist laws that have become increasingly all too common in Britain (and the rest of the West as well). I await with baited breath the results of this intriguing political story.
Posted by Nick at 3:56 PM

Murphy-O'Connor would have to be made a Lord Temporal, the Lords Spiritual seats still being reserved for Anglican bishops. That's why a dispensation from Rome is required...presumably in the highly unlikely event that the Church of England achieved corporate reunion with Rome and RC bishops were automatically the Lords Spiritual, no such dispensation would be necessary.

Thanks for the clarification that the Cardinal would be a Lord Temporal, however I believe the dispensation from Rome is required because Catholic Canon Law normally forbids clerics from holding public office.

Good news. If only the Lords had not had their power taken away early in the 20th Century.

I suppose that they have to be technical about the ban on holding political office but, in similar fashion to the monarchy itself, I would not consider the House of Lords to be "political" in the same way that the Commons is. Of course, thanks to the meddling of the government over the years the House of Lords has managed to become both political and powerless at the same time.