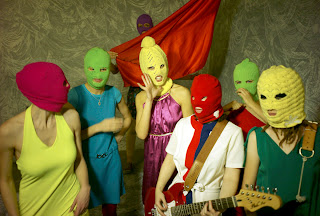 Before I continue with this post, I warn my readers that the content of this post may be offensive to some of my more easily offended readers.  The language and content is adult in nature.  If you think you may be offended by this please do not read on.

Back in February several members of a Russian Feminist Punk rock band called Pussy Riot stormed into the Cathedral of Christ the Savior in Moscow wearing wearing ski masks (a picture of the band is above) and attempted to play a song protesting the presidency of Vladimir Putin.  The song was titled "Holy Shit."  While details are difficult to find [I originally found a detailed description of the events on Wikipedia that described the members of the group mocking the Agnus Dei (or rather the Russian equivalent of the Agnus Dei) and, if memory serves me right, compared Putin to a relation of Satan within the chant] but as of the writing of this post such details are missing from the Wikipedia site.  Readers who would like to see an actual recording of this event can follow this link on YouTube, but be forewarned that you may see related videos on the sidebar related to this topic that may contain nudity. The members involved in this event were recently convicted of hooliganism motivated by religious hatred and sentenced to two years in prison.  The media and governments around the world have shown the all-too familiar shock at the harshness of the sentencing as well as the Russian government's encroachment upon freedom of speech.

This unfortunate even isn't about freedom of speech, it's about the violation of private property and civil decorum, not to mention blasphemy.  Citizens to do not have the right to storm into a church and desecrate the House of God by screaming vulgarities and blasphemies in the name of political protest.  If the members of Pussy Riot needed to do this, they could have done it from countless street corners, not from the altar of an Orthodox Church.  Is the punishment harsh?  Perhaps, perhaps not.  Freedom of speech has its limits, and they violated those limits.  It's time for the world to stop their belly aching in support of Pussy Riot and start standing up for the rights of Christians to worship in the privacy of their own churches without worrying about political dissenters storming in and causing a scene.  With the world's opposition to all that faithful Christians believe, I have a feeling that these kinds of events will become more widespread.  God help us against persecution!
Posted by Nick at 6:24 PM

I find that the members of this band have defiled a holy place and we should support the decision made by the Russian government if not challenge them for harsher punishment. Also the orthodox and catholic faiths are formally one religion many times over and share many of the same beliefs making this in a way an assault on the catholic church as well.

I don't suppose you'll be continuing this blog, will you?