Thoughts on the Election of Pope Franics 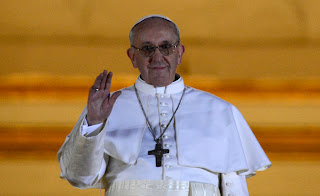 When His Holiness Pope Francis was elected less than one week ago, I met the news with an uncertain heart.  I had never heard of Cardinal Bergoglio, so I knew nothing about his past, his views, or his orthodoxy.  Because of that, I wasn't elated like I was when Benedict was elected almost eight years ago.  I went home after work (as a governmental employee I am not supposed to use the internet for personal purposes) and researched Cardinal Bergoglio on the internet.  What I found (mainly on Rorate Caeli) plummeted my into the depths of depression.  My friends over on Rorate had little good to say about our new pope.  I began to fear that he would suspend Summorum Pontificum and persecute traditional Catholics like myself.  Fr. Zulhsdorf was mostly silent the first 24 hours or so after Francis' election, so I couldn't go to him for help.  I began to judge his pontificate in the first 8 hours of reign, and even found myself hoping he wouldn't live long enough to do much damage to the Church.  Then I found myself feeling guilty for thinking like this.  I was an errant son showing ill will towards his spiritual father.  I realized that I must show respect, obedience, and love towards our new Holy Father, and give him a chance.  He may not have been the man I would have voted for if I were a Cardinal Elector, but he is the man God has allowed to lead His Church.  May God grant him the wisdom, strength, and courage to lead the Church faithfully.  Let us all pray for our Holy Father Pope Francis.
Posted by Nick at 9:29 PM

For me, Francis's pontificate is disastrous. Maybe someday Our Blessed Lord will convince him to consecrate Russia by name to Our Lady of Fatima's Immaculate Heart to end the Church's current crisis.

I hope and pray the Holy Father will live long enough to banish, Modernism, Progressivism, the Novus Ordo Missae, false ecumenism, the false "doctrine" about religious freedom, and the collegiality that democratizes the Church.

But I'm sorry to say that Francis's pontificate has justified most fears I felt about it. It still does.

The Church doesn't need renewal. She needs restoration that would repeal every innovation we've seen from 1962 on.