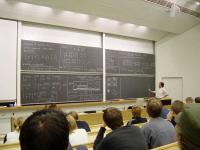 College Days
Yet again, it's been quite a while since my last post. I'll try from now on to post on a more frequent basis. This post, I'd like to focus on something totally unrelated to either Catholicism or monarchy: college. I'm currently in a college level program (to keep a semblance of anonymity--in other words, to protect my own butt from any negative action relating to school because of my views-- I'll not say what kind or where) at a college in Washington state. Here's what I've got to say.
I cannot stand college. In America in the 21st century, it's hard to get a good-paying career without at least a bachelor's degree--but with the proliferation of students in college getting four year degrees a bachelor's degree doesn't amount to a whole lot these days. Because of this, many young people need (or feel the need) to go to college. So you spend four or more years getting a degree in a field you have no idea if you will ever--or can--use in the real world. Many students spend their first 2-3 years just trying to decide on a major. At the end of four or five years, you've racked up anywhere from a few thousand to tens of thousands of dollars in student loans. For what? A degree that you can't use and make it hard to find a career-track job. So then what do you do? Go back to school for a graduate degree. More money and time for another degree. But what if you find out that you don't like that field either?
Then there's the issue of college textbooks. Call me a conspiracy-theorist, but I believe that college professors must have some sort of financial agreement with textbook publishers. Just about any given textbook has already gone through several editions by the time you buy it, and then at the end of the semester you try to sell it but find that none of the campus or online book sellers will buy it because the book will have a new edition for the next session. So now you're left with an $80 book that you have no use for and will only collect dust on your bookshelf. Might as well throw the book away, or better yet, burn it--it'll make you feel better.
Then there's the professors. Most are extremely liberal, if not outright Communists. They like to preach the modern religion of diversity and multiculturalism, but all that amounts to is a philosophy of "all things are relative" except traditional Christian (especially Catholic) values and beliefs. Multiculturalism means accept, celebrate, and value all cultures as long as they're not of European origin--to them European means white and white means bad. I'm definitely no white supremacist, but I'm not ashamed to be white. Far too many college professors--let's admit it, most professors are white--are ashamed to be white. From white man's burden to white man's guilt. Not much progress, huh? Then there's the arrogance factor: college professors are better than you. Why? Because they have three characters in front of their names: Dr. Why spending six or more years in college makes a person better than others I'll never know.
Sometimes I look at life in the past and envy those who are long dead. Sure, their lives were far less comfortable than ours today, but does comfort make a life better? I'd answer with an emphatic NO! Before the modern age, people entered their "profession" at an early age. Many required a lot of physical activity (lower rates of obesity and hear disease). They got to be outside a lot (I love the woods, mountains, rivers, lakes). The average man didn't have to go into debt up to his proverbial eyeballs (with scandalously high interest rates) for school, house, car, boat, lake-place, etc. Life was simpler, not easier, and perhaps more fulfilling and meaningful. The average man was concerned with saving his own soul and providing for his family. The modern man worries about the mortgage, insurance, children's college funds, his 401K plan, the cost of gas, the war in Iraq, his teenage daughter getting pregnant, his teenage son getting someone else pregnant, his other teenager using drugs or alcohol, school violence, etc., etc., und so weiter, und so weiter. Life in the distant past may not have been easier, but it was a whole lot simpler. Well, that's my vent for the day. Thank you for helping me keep my sanity!!
Posted by Nick at 9:50 PM