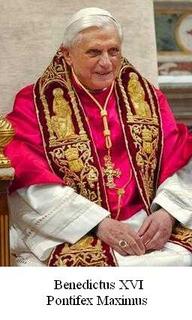 Our Holy Father
It's been a while since the election of our Holy Father Pope Benedict XVI, but I thought that I should make a post on him. I was familiar with Joseph Cardinal Ratzinger before he was elected to the Papacy, but looking back I wish I was more familiar with him. The only writing of his that I ever actually read was Dominus Iesus, but whenever I heard or read an excerpt from one of his writings I always thought "This man is a genius!! He knows exactly how I feel!"
When our late Holy Father Pope John Paul II died, my first pick for the new pope was Ratzinger. I always prefaced this when someone asked me who I was rooting for by saying that the Holy Ghost doesn't consult me when He raises up the man He has chosen to be the next pope--but nonetheless I was hoping Ratzinger would be elected Pope. When those great words rang out from the balcony of St. Peters "Habemus Papam!" and were followed with Ratzinger's name, it was all I could do to contain myself (I was in a public setting at the time).
I had great hopes at Benedict's accession to the papal throne, and I still do. He knows that the present state of the Novus Ordo Mass as it is commonly celebrated--especially in America and Europe--is a mess. He has celebrated the Traditional Latin Mass several times over the past 15 years, has relationship with the Priestly Fraternity of St. Peter (albeit a superficial one, but supportive at that), it is reported that as of today he will issue a document banning gays from the priesthood. It is also rumored that he will lift the restrictions presently upon the Traditional Latin Mass, making it possible for any priest in the Latin Rite to say the Traditional Latin Mass without needing the permission of the local Ordinary. But of course there is always room for improvement.
I had hoped, as a monarchist, that Benedict would have had a traditional coronation Mass. What he got instead was a fairly simple "installation Mass." There was no papal tiara, no Sedia Gestatoria (the throne upon which the popes of yesteryear where carried around so the people could see them). He even took the papal tiara out of his coat of arms. We must remember that after being a spiritual monarch, the Pope is also the sovereign of the Holy See (aka Vatican City State). If he would have taken advantage of his royal status, he would have brought so much interest, respect, and love for monarchy in general. Bring back the papal tiara, the Sedia Gestatoria, the coronation of Catholic monarchs by the pope, bring it all back. If we as a civilization are to restore monarchy to its proper place in the world, it should most certainly start with the papacy. 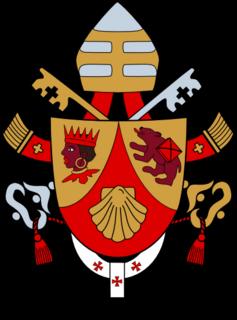 I had great expectations with the election of Josef Cardinal Ratzinger as pope and I still do. I am proud of him and to call him Holy Father. May God protect him and grant unto him a long and glorious reign. Long live the Pope! Long live Benedict!
Posted by Nick at 11:31 PM