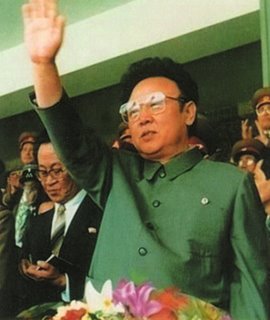 The Communist government of North Korea announced that it successfully carried out a test of a nuclear weapon on October 9, 2006 (01:36 UTC). I must confess that I was glued to the TV last night watching news reports of this story. This incident concerns me, as it does most governments in the world. The fact that it appears that North Korea now has "the bomb" scares me, and I wish it never had happened. But I nonetheless thought I'd comment on the situation from a larger perspective.
According to some news reports I heard last night, the reasoning behind the North Koreans' desire to have nuclear weapons is fear of U.S. aggression. Some member of the North Korean government was supposed to have said (I'm going from memory and paraphrasing here) that if Saddam Hussein had the bomb, he'd still be in power. Is this true? I think so. The U.S. invaded Iraq based on either lies or faulty intelligence (I lean toward the lies option), with the hope of taking out Saddam before he attacks us. If Saddam had nuclear weapons, the U.S. would have risked nuclear war by invading Iraq. No one, not even the U.S. wants an all-out nuclear war, so we would not have invaded Iraq under this hypothetical.
Now that North Korea apparently has nuclear weapons, the U.S. will be much more hesitant to show any overtly aggressive behavior towards North Korea because of the treat of a nuclear attack. Kim Jong-il can remain in power with confidence. Were his actions justified? Morally, no, they were not. All nations have a duty to avoid nuclear proliferation due to the possible (and horrible) consequences. From a strictly political standpoint, one can understand the concerns of Kim Jong-il. The U.S. under the Bush administration has a history of unjust aggression against those it considers its enemies, and one could argue that Kim Jong-il was only trying to make sure the U.S. won't invade North Korea.
One could also argue this point: Why shouldn't North Korea have the bomb? The U.S., Britain, and Israel all have it. Why shouldn't North Korea have it? "North Korea is part of the Axis of Evil and can't be trusted with nuclear weapons," a neo-con might respond. I agree, as a Communist government that is horribly repressive, North Korea is an evil government. But why should the U.S., Britain, and Israel have the bomb? "We, along with our allies, can be trusted with the bomb, because we stand for freedom," says the neo-con. In the history of mankind, only one government has used nuclear weapons against people: the United States. And even more than that, the U.S. used the bomb against civilians. It seems to me that even we can't be trusted with the bomb. Why do we have an inherent right to nuclear weapons? It isn't a God-given right, I can tell you that.
(As a disclaimer, I do not support the North Korean government in any way, and I hereby condemn their recent nuclear weapons test, along with all nuclear weapons proliferation.)
Posted by Nick at 10:29 PM