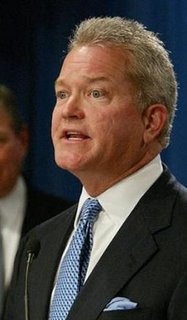 Why The Republicans Deserve to Lose

The allegations that Rep. Mark Foley (R-FL) engaged in inappropriate e-mails and instant messages with a former under-age congressional page is certainly disturbing. What is more disturbing is that the former page is male. A homosexual Republican? Yes, you got that right. Not only is the whole affair embarrassing, but to make it worse, Foley sought to dodge responsibility by blaming his behavior on alcoholism, being molested as a teenager by a "clergyman," and that he's gay. None of these reasons are excuses for what he did. He's apparently a drunk (despite no one knowing about it in the past), but being drunk doesn't make you hit on teenage boys. He was molested by a clergyman, but that also isn't an excuse. If my mother was murdered, that doesn't give me an excuse to turn to murder to deal with my personal tragedy. He's gay. Being gay is supposed to be okay in America in 2006, so he can't quite use that as an excuse either, or can he?

If we look at the abuse scandal that rocked the Catholic Church a few years back, the vast majority of the sexual abuse occurred between priests and teenage boys. Despite what the law say (and no, I am not trying to give the predator-priests a pass) teenagers are not children. If I had consensual sex with a 16 year old girl, it does not make me a pedophile, in fact it doesn't even make me a criminal (the age of consent in my state is 16). But looking again at the predator-priests we will see that most of them are homosexuals who have a preference for teenage boys. Is there a connection between being an active homosexual man and attraction to teenage boys? I'm no scientist, nor am I trying to make some wide sweeping scientific statement, but perhaps there is. But I digress.

Foley dodged responsibility by checking himself into rehab. It was a pathetic attempt to garner sympathy from the American people, as well as an attempt to get out of the unwelcome attention for a while.

So why do the Republicans deserve to lose in November? The Foley incident has brought several things into the open about the Republican party. First, apparently there are several other closeted gays in the Republican party who are known to be gay by their fellow Republicans but who won't expose them for the imposters that they are. Secondly, Foley's indiscretions (including allegedly showing up at the congressional pages' dorm drunk) were exposed up to years ago, and it seems that the Republican leadership in the House did nothing about it. Another strike against them. And for strike three?

I've said it before, but the Republicans have played the pro-life base for dupes. They aren't committed at overturning Roe v. Wade, they just use it to drive out their conservative base. The Republicans have become so out of touch with their supporters and become so arrogant in their own security of power, they have forgotten who put them in that position of power. If pro-lifers and those who support traditional religious values will abandon the Republican party, perhaps all those Republicans in Washington will remember what they used to stand for and re-embrace those values. If not, it will be the status quo for decades. Either way, I predict big losses for Republicans next month.
Posted by Nick at 9:14 PM