Why this Monarchist is voting for Trump 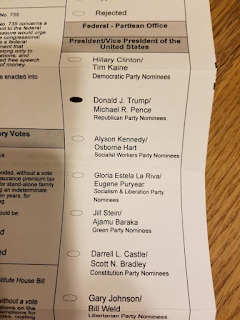 The above is an actual picture of my mail-in ballot that I turned in just yesterday (Washington state is entirely a mail-in ballot state).  Why would a staunch monarchist who believes this republic was a grave mistake support an American presidential candidate?  I don't believe in republicanism or democracy, so how do I justify this action?  How do I explain the undeniable enthusiasm that has been growing in me over the past couple of months for Donald Trump?  The sleeping (and teething) baby in the next room prevent me from elaborating as much as I would like, but I will attempt to explain my choice--not just my choice in voting at all but also my choice of Donald Trump.

Firstly, I am a Catholic.  Traditional Catholic teaching has always been that any legitimate form of government is acceptable as long as that government serves the common good.  But, and here is a big but, the Church has traditionally always preferred monarchy--Catholic monarchy.  We don't have a monarchy here in the U.S.--Catholic or otherwise--so it is within my Catholic rights to participate in this republic.  While I don't believe in this republic it is my duty to do what I can to make this republic serve the common good, such as voting for political candidates who are pro-life, pro-marriage and respect the Church's liberty.  Donald Trump has stated that he is pro-life (and the only candidate I can ever remember saying he thinks women who have abortions should face some form of punishment) and that he will appoint pro-life judges.  He has also stated that he will repeal the Johnson Amendment which prevents clergy from preaching for or against political candidates (and it seems sometimes issues) or lose their tax-exempt status.  Pro-life and pro-Church liberty?  Sounds a whole lot better than his opponent who (thanks to the WikiLeaks email scandal) it has become known hates Catholics and of course we all know wants abortion on demand.  I have a Catholic duty to prevent crooked Hilary Clinton from doing more harm than she has already done to our unborn and our nation--it is my Catholic duty to vote for a pro-life candidate.  Trump--if he becomes President--could disappoint, but I must take him at his word just as I would any other candidate.

Secondly,  I've found myself agreeing with much of what the alt-right argues.  The vast majority of Republican candidates have proven themselves to be nothing but a bunch of cucks (look it up if you don't know what a cuck is) who bow down to political correctness and whatever the Democrats and the social elites demand of them, all to stay in power.  Donald Trump represents a change from all the other cucks from whom we have to choose, a punch in the nuts of the establishment that has disappointed conservatives in this nation for decades now.  You can keep fixing your broken car knowing that it is just a matter of time before it breaks down again, or you can junk it and buy a new one.  The Republican Party as we have it now is a broken car that is beyond fixing.  It's time to junk it and buy a new one.  Trump is that new car.

I don't trust the mainstream media.  I don't trust the pollsters who work hand-in-hand with the media, so I don't know just how close this election really is.  I hope and pray that Trump wins on Tuesday by a landslide.  If Hilary Clinton wins, I say to her anathema sit.  She'll probably take us into World War III with Russia, but maybe then they'll kick our collective asses and we'll be in a better condition because of it.

Servant of the Chief said...

I too have been interested in the alt right these past few months, but would offer you a word of warning to not be entirely too enchanted with the movement. It is an interesting and welcome reaction to the progressivism of the modern world and a more than welcome break from the stolid uselessness of conventional conservatism.

I can see your logic in voting for Trump, any other election you would have been well within your Catholic rights not to vote for a useless feckless 'cuckservative' who couldn't preserve a sealed can of peaches. Trump, at least, is making all the right enemies.